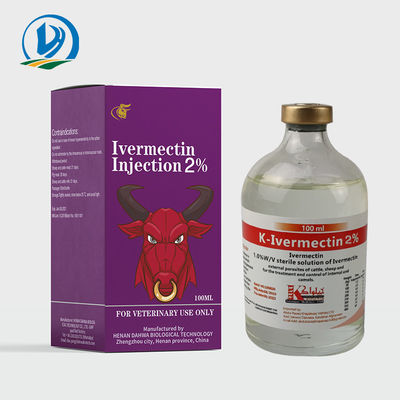 Ivermectin is a new type of broad-spectrum, high-efficiency, low-toxic antibiotic antiparasitic drug, which has a good repellent effect on internal and external parasites, especially nematodes and arthropods. But it has no effect on tapeworms, flukes and protozoa. The repellent effect of macrolide antiparasitic drugs on nematodes and arthropods is to increase the release of the inhibitory transmitter γ-aminobutyric acid (GABA) and to open the Cl ion channel controlled by glutamate. Enhance the permeability of the nerve membrane to Cl, thereby blocking the transmission of nerve signals, and eventually nerve paralysis, causing muscle cells to lose the ability to contract, which leads to the death of the worm.

[Product Name] Ivomec 1% Injection [Main ingredient] 1% Ivermectin [Drug interactions] Being used together with diethylcarbamazine, the Ivomec 1% Injection may cause severe or deadly encephalopathy. [Indication] Used to prevent and treat the nematodiasis, acariasis and other parasitic insect diseases of livestock. [Administration and dosage] For subcutaneous injection: dosis, per 1kg bodyweight, 0.2mg for cattle and sheep, 0.3mg for pig. [Adverse reactions] [Precaution] The Ivomec 1% Injection can only be injected subcutaneously, because intramuscular injection and intravenous injection may easily cause toxic reaction. It is inadvisable to inject subcutaneously more than 10ml at each point.

Our products are sold all over the world, you can rest assured.

描述 描述
Get a Quote